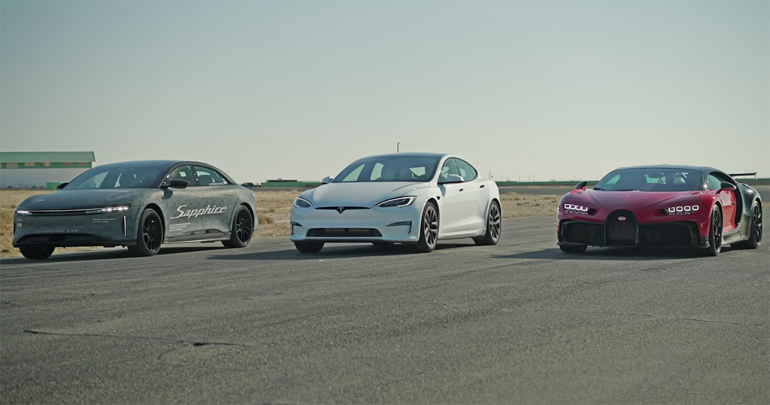 The metrics of 0 to 60 mph or a quarter mile time is just one page taken out of the thick book of automotive performance and there’s a much bigger picture to being the champion of this one measurement. However, when it comes to bragging rights, Tesla made headlines and justifiable bragging rights for owners of the new Tesla Model S Plaid (1,020 horsepower) as it demolished everything with a 0-60 mph time of about 2 seconds and shattering the quarter mile in 9.4 seconds (give or take).

In the horsepower and “quickness” wars of electric vehicles (EVs), there’s a new battle upon us that we’ve never seen before. One that takes advantage of that instant torque from electric motors and sending a family sedan down a drag strip (or your local street) that almost defies the laws of physics, at least for a “car.”

Lucid Motors has come onto the EV scene to shake things up with Peter Rawlinson, a former Tesla vehicle engineer, at the helm. The Lucid Air Dream Edition was already a stunner keeping up in a drag race with the $4M Bugatti Chiron Pur Sport (1,479 horsepower) and requiring the Model S Plaid’s driver to keep their foot down. Now, Lucid answers the Model S Plaid with the Lucid Air Sapphire touting over 1,200 horsepower from its 3 electric motors with the extra motor being at the rear to take advantage of that 5,400 pounds of curb weight shifting to the rear upon a launch. The result? Well, there’s a new king in town and it’s the Lucid Air Sapphire, the world’s quickest production car!

Not to take much away from the Bugatti Chiron Pur Sport, but if this race was a bit longer the Chiron would take them all – which is where those millions of dollars come into play. Bottom line, the Chiron Pur Sport is a gas-burning engineering marvel, which is probably one of the last of this caliber, and still the “fastest” (top speed).

What a time this is to be alive!