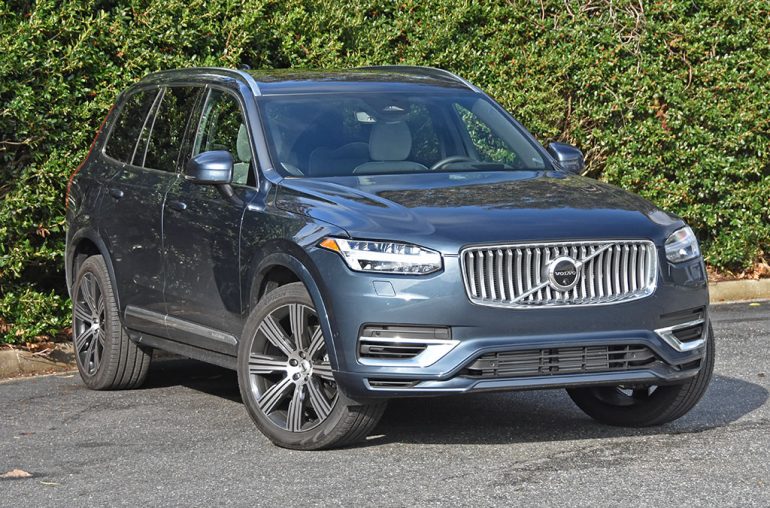 As we approach a new future of automotive electrification, manufactures continue to have a bridge over an electric vehicle (EV) world in innovative plug-in hybrid electric vehicles (PHEV). Volvo has been in the PHEV game for some time now, and the latest XC90 midsized three-row seating crossover continues with some minor updates from trim level revamping, additional power, and a slightly increased all-electric range.

Having experienced the 2021 Volvo XC90 Recharge just a couple of years ago it is refreshing to get another go at such a vehicle and see what the manufacturer has done to keep it fresh. With that, Volvo impresses me again with a decently performing vehicle for its versatility in being a plug-in hybrid along with the premium accommodations in a unique approach with the choice of its wool blend seat material found on my test vehicle.

Powering the 2023 Volvo XC90 Recharge is the latest plug-in hybrid combination of an 8-speed automatic transmission, , an eAWD system, a 2.0-liter turbocharged 4-cylinder engine, and an electric motor that are good for a total power output of 455 horsepower and 523 lb-ft of torque. If you’ve taken not from previous years, that’s a bump in power to the tune of 55 extra horsepower and an additional 51 lb-ft of torque, which I feel in this 2023 model during my weeklong review. That extra power is able to move the XC90 Recharge T8 with a little more authority hitting 60 mph in just 4.5 seconds versus the previous years, hitting 60 mph in 4.9 seconds. Moreover, the extra battery capacity in the 2023 model year adds about 12 miles of all-electric (Pure drive mode or Hybrid mode’s use of the battery power only) range bringing the total of electric range to 32 miles. 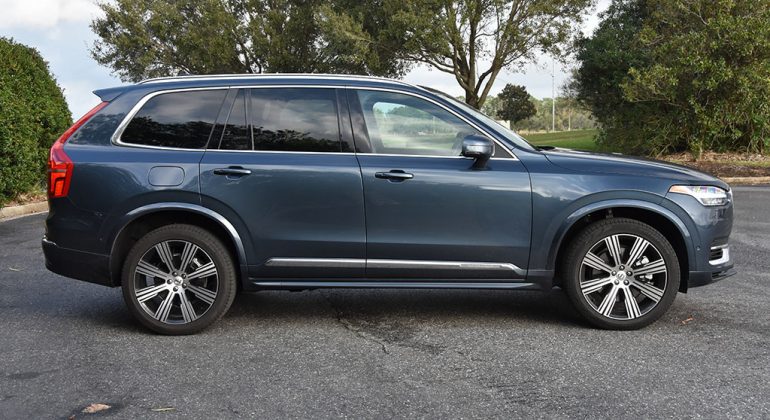 The 32 miles of electric range is legit. I walked away with just over 32 miles on my drive, where I was careful never to hit the throttle hard enough to enact the gas engine, as it will do such if you ever need to accelerate moderately outside of the somewhat forgiving bounds of the electric motor’s power. The all-electric power is decent for cruising and accelerating softly and maybe just enough to “quietly” and subtly overtake vehicles on the highway. 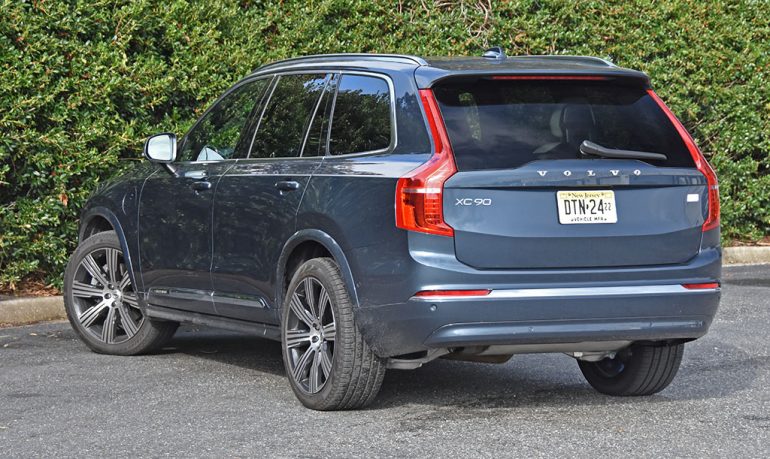 In the default Hybrid mode, the intelligent drive system sorts things out on its own, where it’s a thoughtless and often seamless process for power. The only time things aren’t as seamless as you would like is when moderate to heavy power is demanded, and the engine kicks over for a somewhat abrupt surge of power. Otherwise, the XC90 Recharge is a smooth operator that handles itself well for a PHEV three-row crossover that tips the scale at 5,053 pounds, which is pretty good considering its collective of parts and a sizable battery pack.

There’s also a Power drive mode that lowers the air suspension and keeps the engine running at all times, bringing up an RPM gauge in the 12.3-inch digital gauge cluster. There’s a respectable sporty feel of the XC90 Recharge, but it never goes as far as feeling like a sporty crossover where it seems to place luxury at the forefront of everything it does. The tow rating is 5,000 pounds for the XC90 Recharge T8. 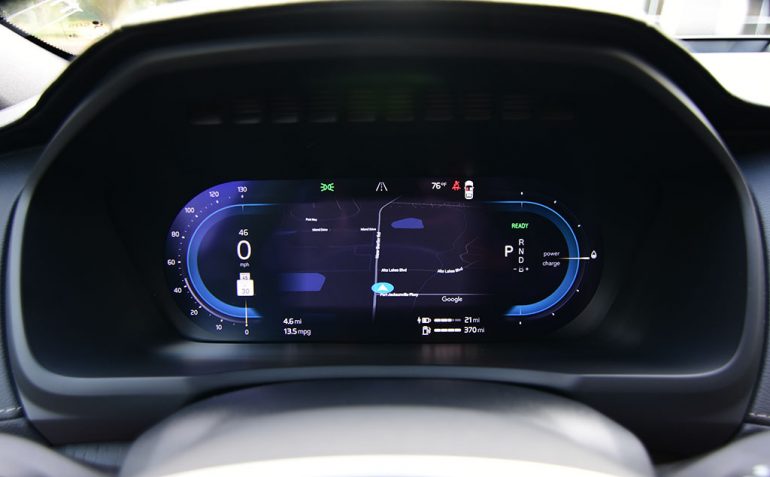 The Volvo XC90 Recharge T8 often excels in the area of fuel consumption if you use its plug-in capability often. Doing so, charging it up with a full charge overnight, you’ll notice exceptional mileage figures. Though, using the normal Hybrid system without charging the battery pack, you will expect to get about 25 mpg city or 27 mpg highway. Overall, using a decent charge and driving over 100 miles, you’ll best the 58 MPGe combined figure easily, and if you keep on going you’ll cover just over 500 miles of total range using up the 18.8 gallon fuel tank.

The interior of the XC90 Recharge in the T8 Ultimate Bright trim is a unique look and feel for its seats in having a wool-blended material throughout. In my test vehicle, opting for the Wool fabric removes the seat ventilation, and there remains to be an option for massaging seats but those were also not equipped. There are plenty of seat power adjustments, and a decent range of movement for the seats for adults of just about any size can find a comfy and optimal seating position up front. Out back, the second-row seats can come in a three-passenger bench as in my test vehicle or opt for captain’s chairs. The third row remains to be short on leg room but has a decent amount of shoulder and hip room. 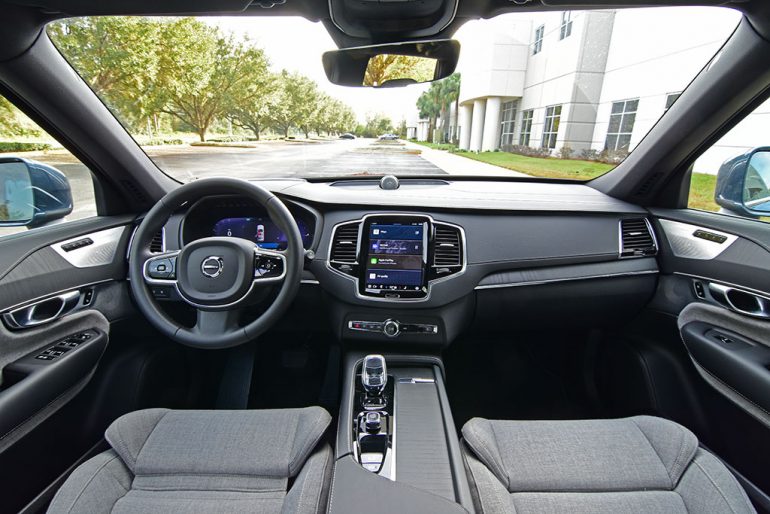 There is a welcoming premium feel that continues in the XC90 Recharge where you have open pore wood trim, several soft-touch surfaces, and a decent fit and finish throughout. The optional Bowers & Wilkins audio system is delightful, titillating your sound sense in a special way with a good separation of high and low frequencies, and even more so with the specialized equalizer presets. 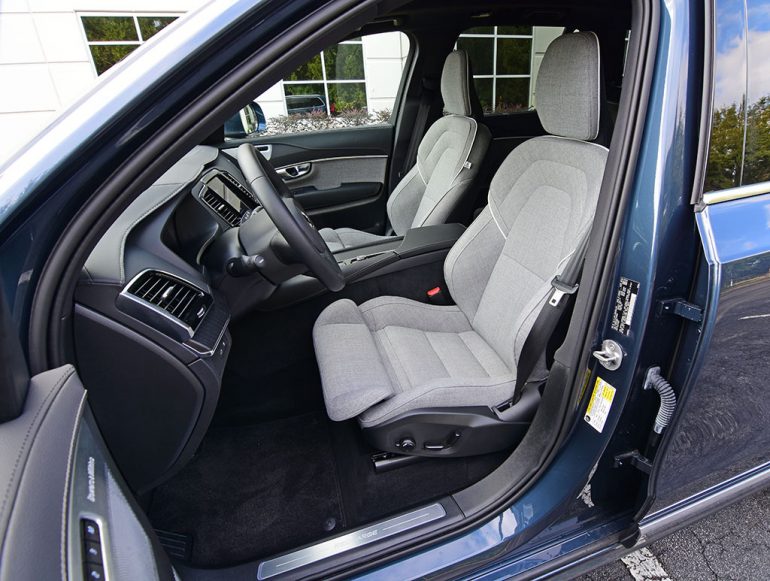 The latest infotainment unit in the Volvo XC90 Recharge remains to use a 9-inch portrait-style touchscreen, which has a vast learning curve and can be somewhat cumbersome at first. After spending a few days with the system’s many features, and access menus become second nature, but the system is unique in the scheme of modern-day automotive touchscreen interfaces. I do appreciate the dedicated area on the touchscreen for the climate controls and having a large physical volume knob below the screen next to dedicated seek/track buttons and defog buttons. 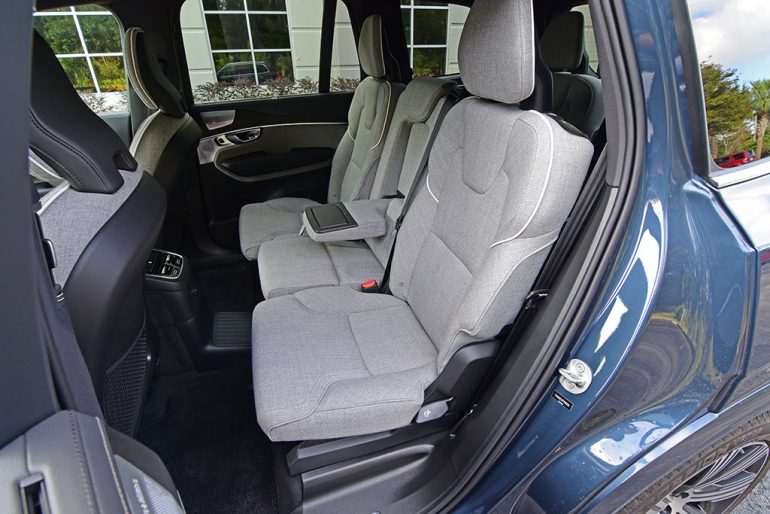 One thing that I would change is how the backup camera displays, only using a portion of the screen where it may only display one view angle at a time or just the 360-surround view even though there is a 360-degree camera system. Probably the biggest update to the system for the 2023 model year is the system is now Google based using built-in Google apps, such as Google Maps, and a dedicated Google Assistant for prompting quick functions. 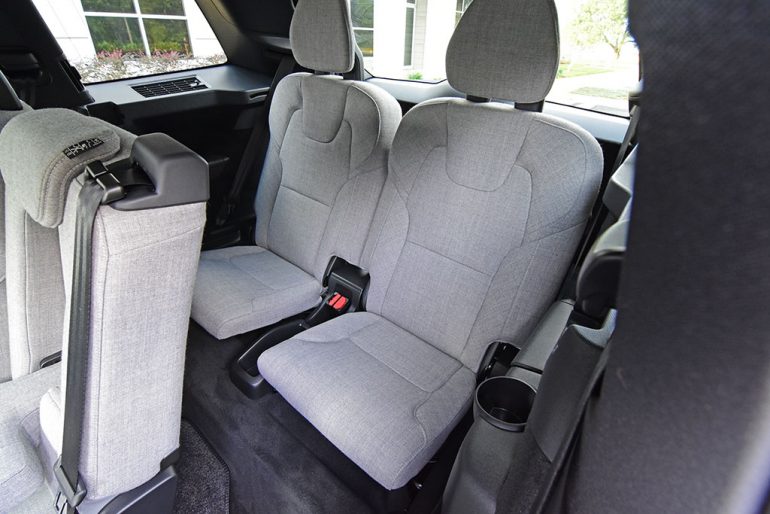 Volvo has always been at the forefront of safety, and the XC90 Recharge is no different. I am always pleased to have a full array of expected active safety features, but on top of that, Volvo goes the distance to keep many of these features active and alive even if you choose to manually disable them. I found the lane keep assist and collision avoidance system to step in at times, even with me manually turning off the lane keep feature. There’s a neat way of Volvo having some of these systems slightly step in when they are really needed. You have the expected blind-spot monitors, rear cross-traffic warning w/automatic braking, front collision warning/automatic braking, front and rear parking sensors, driver attention warning, automatic high beams, and adaptive cruise control. 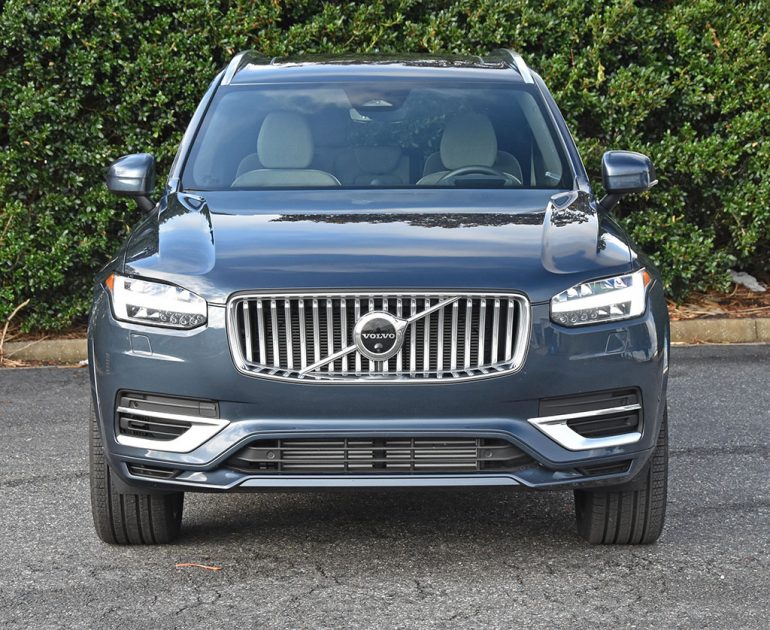 The Volvo XC90 Recharge T8 Ultimate Bright with the wool-blended seats comes to an as-tested price of $85,495. The XC90 Recharge T8 starts at a price of $71,900, which isn’t bad considering its plug-in hybrid capabilities, newly added power, and added Pure EV mode range.